One neighborhood reaches for resilience: A letter from Chicago 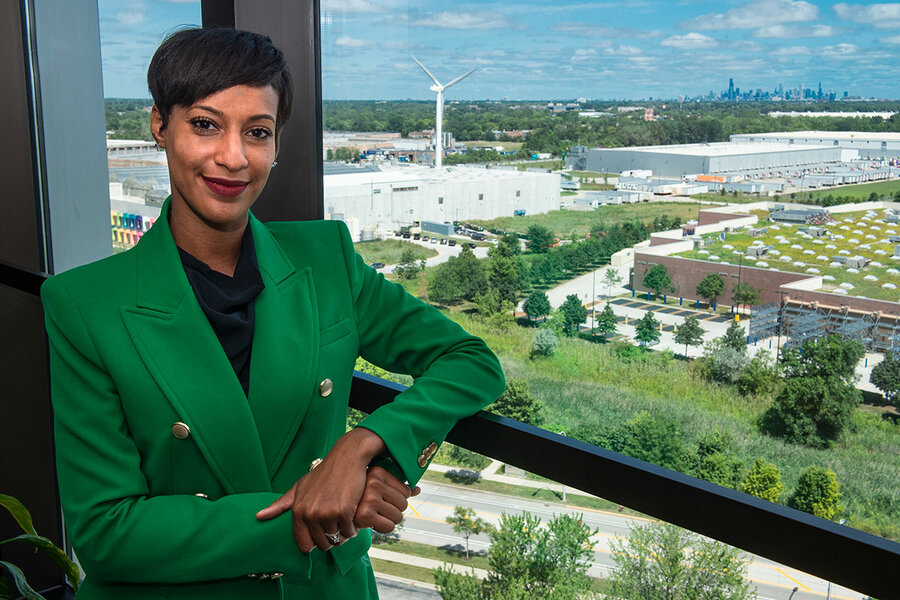 “Welcome to Pullman,” said Ciere Boatright. A neighborhood leader, she’s a prime mover in the revival of one of America’s most famous planned cities – a section of South Chicago named after railroad magnate George Pullman.

Back in the 1980s, dominant colors in this part of the city were gray and brown. Abandoned steel plants and other factories lined the nearby Dan Ryan Expressway, rusty testaments to American manufacturing that no longer seemed able to compete.

But when I visited this year on a summer day, almost all I could see was green from a viewpoint on the 11th floor of the USBank building that overlooks the former Ryerson steel mill. The expanse of lawns and trees rivaled the leafiest suburb. And Ms. Boatright, then vice president of real estate and inclusion at Chicago Neighborhood Initiatives (CNI), was showing me more signs of rebirth.

She pointed out the Walmart, which set up shop nearly a decade ago; the Method factory that makes eco-friendly soap and other cleaning products; and the greenhouses of the Gotham Greens urban farm sitting on top of the factory.

“See the big white building with the blue stripe?” she asked. “That’s Amazon.” Pullman is the location of the company’s first fulfillment center in Chicago. (Ms Boatright has since joined CRG, a national real estate company, doing similar development work on a broader scale.)

Pullman still is facing challenges. But its strides of progress may offer hope to other urban neighborhoods aiming for stability. And in some ways, its past has been a prelude. Some old priorities have resurfaced.

In 1880 George Pullman, whose Pullman Palace Car Co. brought upscale train travel to the middle class, sought to improve life for his workers as well. He built a new factory and a town next door that would house workers in pretty brick homes with modern conveniences, including indoor plumbing, gas heat, and landscaping. The community had shops, parks, athletic fields; even the factory was architecturally distinguished. His idea was that workers living in elegant surroundings would be happier and more productive.

But workers chafed under his Victorian-era rules and expectations. And when the panic of 1893 led to a brief but sharp depression, Pullman cut employees’ pay, but not the rents he charged them. That prompted a wildcat strike, which was soon joined in solidarity by many other U.S. railroad workers. The strike was broken after two months by President Grover Cleveland, who sent in the Army to get the trains moving again.

Pullman won the strike, but his workers’ paradise never recovered. The Pullman neighborhood endured a string of reversals over the next 120 years: the Great Depression, deindustrialization, white flight, foreclosures, a mentally ill arsonist, and an urban plan that called for razing a good part of the neighborhood.

Starting with investment – for all

“There are lots of knocks in Pullman and we keep getting up from the mat,” said Tom McMahon, a retired police captain and longtime resident and community activist. “I think that’s resiliency.”

Many areas are struggling to achieve that.

If Chicago is truly going to be resilient, all neighborhoods must share in it – even low-income ones, the Urban Land Institute Chicago concluded in a report released in July. And the key ingredient to make that happen?

She showed me what a determined effort had achieved, taking the wheel of her Lexus to drive to the 111th Street Gateway Retail Center. It’s a 10,000-square-foot building that houses an office hub for Blue Cross Blue Shield, a Pot Belly restaurant, and a food hall.

The 4-year-old development is modest. But Ms. Boatright talked about how intentions determine success. By offering jobs to residents, it begins to reverse the trends of the past century, she said. “The people who first experienced disinvestment are the first to benefit from reinvestment.”

In all, some $450 million of public and private investment has come into the neighborhood over the past decade. And “some of the broader social indicators are starting to improve,” CNI President David Doig said in an interview this week, pointing to rising employment and decreasing crime. But “we suffer from perception issues. People still see the South Side of Chicago as an industrial wasteland.”

For businesses aiming to plant roots here, not everything has gone according to plan.

“The first month we hit it out of the park,” said Ashley Walker, area manager at Lexington Betty, a local barbecue restaurant. But when the pandemic hit, business fell off and hasn’t fully recovered.

But the investment has created a sense of security. “It’s safe,” said one of the park rangers for the recently opened National Pullman Monument. “Rangers live in the neighborhood even though they don’t have to.” The monument, which opened Labor Day weekend, expects to attract 300,000 visitors annually to the area. A Culver’s fast-food outlet launched in November, the first stand-alone restaurant to locate in the community in more than 30 years.

An inclusive vision, from jobs to gyms

In many ways, Ms. Boatright and CNI are the opposite of Mr. Pullman. While he was top down, their work is bottom up. Where he imposed his vision, they listened.

“We didn’t have a master plan,” she said. Instead, they conducted an exhaustive 80 community meetings to find out what residents were looking for in a revival. “We wanted to make sure that we were planning with the residents rather than planning for” them, she added. Once the priorities were set, Ms. Boatright was tenacious in pursuing the vision. “I was born on the Fourth of July,” she said. “I’m a firecracker!”

Residents’ priorities were not that far off from Mr. Pullman’s. First was to bring in retail stores, in particular a grocery store because by that point the neighborhood had none. “We reached out to just about every grocer you can imagine,” Ms. Boatright said. Finally, Walmart agreed to locate a store in the neighborhood, with a third of its floor space dedicated to groceries and the promise to give hiring preference to Pullman residents.

Jobs were the second priority of residents. And after Walmart, it became easier to recruit more retail to the area.

Residents’ third priority was recreation. The community opted for an indoor facility where neighborhood children could play basketball or soccer, or hit the batting cages under adult supervision. “This is what excites me,” said Ms. Boatright, watching the Bulldogs club basketball team practice at the community center. “They can play year-round and they’re safe.”

The challenge of housing

The community’s final ask – affordable housing – is more complex. Mr. Pullman designed his town so that the supervisors and best-paid workers lived south of the factory. They got the nicest homes. Poorer workers lived north, with far fewer amenities. So as forces of economic decline began to set in, South Pullman always had history buffs, architects, and other outside groups working with residents to preserve the neighborhood. Its ethnic and racial diversity remained. By contrast, North Pullman fell prey to white flight and poverty.

“All of us who were outsiders – and that includes me … we would not have been able to do anything if the local people had not been working so hard with virtually no financial support,” said Susan Hirsch, professor emerita of history at Loyola University and author of the 2003 book “After the Strike: A Century of Labor Struggle at Pullman.”

Despite the lack of financial resources, local activists like Lyn Hughes worked to bring recognition to North Pullman, establishing in 1995 the National A. Philip Randolph Pullman Porter Museum. That’s another wrinkle in the Pullman legacy and a lesson in how even the best-laid plans can lead to surprising results.

Mr. Pullman insisted that the porters on his trains be Black, at least in part because he wanted to keep them from joining white railway employees in a union effort. Still, the Pullman porters got the last laugh, organizing the nation’s first Black union to win a collective bargaining agreement a few years before the white factory workers at Pullman organized.

The Pullman porters were a seedbed for an African American middle class that would be sorely tested in recent decades by deindustrialization and then the Great Recession’s foreclosure wave. Only now is CNI beginning to make progress in North Pullman, buying and rehabbing the housing stock block by block and then putting it up for sale.

Plenty of communities in America are facing decline or failing to prosper. The need to find and follow recipes for resilience is clear. Ms. Boatright’s words are still ringing in my ears.

“We know that this is going to take us a long time,” she said. But “our communities are not problems to be solved; they are communities that deserve investment.”